A collection of fashion items has been stolen from a famous fashion designer, Madeleine. Evelyn is working as a model for Madeleine and brings Strange into the case of the missing collection.  In a strange circumstance, the collection suddenly reappears much to the astonishment of the police and even Madeleine. The collection looks exactly like the clothing that was missing except for a few suspicious articles that are copies. Evelyn notices the guys that stole the collection at a friends house but then is stopped in her tracks. Strange is worried about  Evelyns disappearance and is set to find out what has happened. The trail is found by a typewriter but to get the real culprit with take some swiftness. 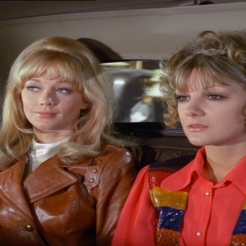 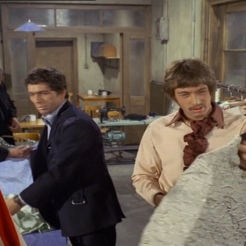 A tame story that doesn’t involve murder but clothes. This is an interesting twist to the crime fiction television storyline that was prevalent in the late 60’s early 70’s.In this story, the fashion designer, who seems guilty herself, is placed in a whodunnit that involves the typical undercutting by the fashion elites, is definitely a new story for me. I did enjoy the episode for its simplicity however it is likely realistic to believe that this sort of crime has and still exists today.